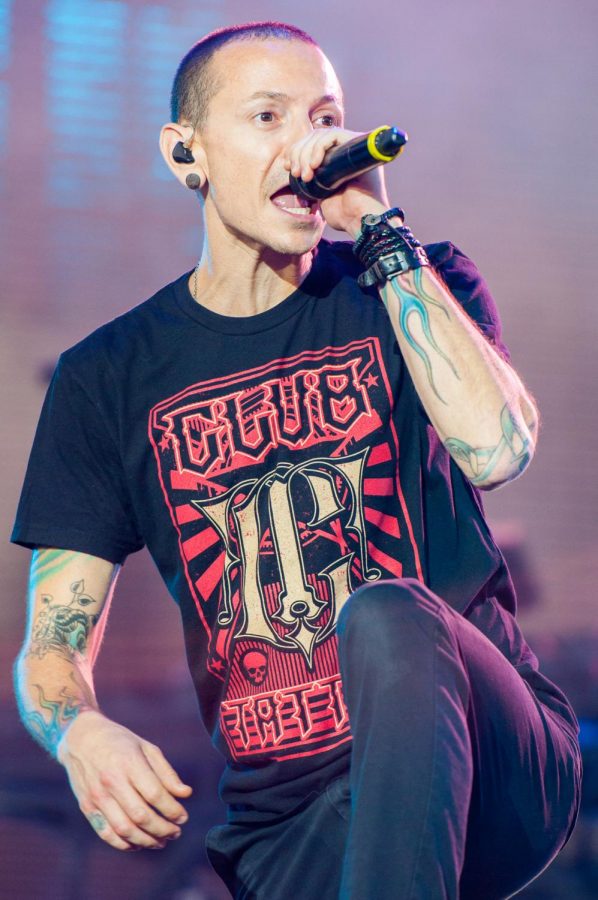 Chester Bennington was an American artist with the band Linkin Park from 2000 until his unfortunate death in 2017.

“This is just who I am, this is just what I write about, what I do, and most of my work has been a reflection of what I’ve been going through in one way or another,” Bennington once said.

Bennington, the front man for Linkin Park, had a long career in music dating back from 1993.Chester was a legend at what he did, he could scream and yell but also, he could make his voice softer.

According to his biography, Chester Charles Bennington was born on March 20th, 1976 in Phoenix, Arizona. His mother was a nurse and his father was a police detective. Chester had three siblings, a brother named Brian Bennington who is a police officer and two half-sisters. When Chester was 7 he was molested by a friend who was a couple of years older than he. His parents separated when he was 11 years old which also had a huge effect on him. Chester went to Ironwood High School and while he was there he started to take drugs and then started abusing marijuana, alcohol, opium, cocaine, methamphetamine, and LSD.

In 1993, Chester first started music when he joined a band called Sean Dowdell and his Friends? This was a grunge rock band, that year they came out with a three-track cassette.

Later that same year he joined a band called Grey Daze, and in 2000 he joined a band called Xero. Xero was the original name of what would be known as Linkin Park. The story of how they got the name is interesting. Bennington is one of six members of Linkin Park the other members are Mike Shinoda who did the vocals and guitar, Brad Delson who the guitarist, Joe Hahn who was a director and a DJ, Rob Bourdon who was the drummer and Dave Farrell who was the Bass Guitarist. One day as Chester was driving down to the studio he passed Lincoln Park in Santa Monica, California. Chester liked the name and decided to pitch the name to the other members and they really loved the name and changed it.

A well-known fact about Chester and Linkin Park is that as a band it is estimated that they have sold over 70 million copies of their songs since 2000.

Bennington loved writing music and performing and often spoke about it.

“We’re shooting for the title of hardest working band in America,” Bennington said. “We’d like to think that our music will always be bigger than any one of our personalities.”

Chester had an alcohol problem and in 2006, his behavior hit an all-time low and the tension in the band was really high so they decided to have an intervention. “I had a choice between stopping drinking and dying,” Benington said.

The other members described his behavior as out of control, they felt like he was two different people. Bennington explained it:  “They said that I was two people — Chester and that [expletive] guy, I don’t want to be that guy.” He ended up getting sober and Linkin Park continued on for years.

While Linkin Park wasn’t making music, Chester had continued to write songs, but he felt that those songs didn’t fall under Linkin Parks style. So, he created a side project band he called Dead by Sunrise, he recruited members including Amir Derakh, Ryan Shuck, Brandon Belsky, Elias Andra and Anthony Valcic. Dead by Sunrise only released one album which was called Out of Ashes and some popular songs were “Let Down,” “Inside of Me,” “Condemned,” and “Fire.”

Bennington was involved in some charity work, he has supported four charities like Music for Relief, MusiCares, GRAMMY Foundation and PETA. He also supported many causes including Animals, Creative Arts, Disaster Relief, Environment, Unemployment/Career Support.

Bennington first dated Elka Brand and they had one child together who they named Jaime, born on May 12th, 1996. Chester ended up adopting Brand’s son Isiah, but the adoption was not finalized until 2006. They broke up, but they still stayed in contact so that their kids could see both parents. Chester later married Samantha Olit in 1996 and six years later they had a son who they named Draven, born on April 19th, 2002. In 2005, Chester and Samantha filed for divorce but in that same year he got married again to Talinda Bentley. Bennington and Bentley ended up staying together till his death in 2017. They had three children, two twin daughters named Lila and Lily and one son named Tyler.

In a 2016 interview with Las Vegas Review Journal he said this about his big family: “Let me give you a typical day. I’m a recovering alcoholic, that’s the first thing. I have a big family. I’ve got three kids in college, one in high school, one in the fifth grade and twin girls who are five, they are going into preschool. I have two pigmy goats, three bantam chickens, a tortoise, six dogs, two cats and a fish, so I have a farm.”

Chester was good friends with a fellow singer by the name of Chris Cornell — they were so close that when Chris’s son Nicholas was born he asked Chester to be his godfather.

Linkin Park released their final album One More Light on May 19th, 2017 but two days before they released the album Cornell died by taking his own life in a Detroit hotel after a show.

When Cornell passed away on May 17th, Chester posted a heartfelt note online and sang at his funeral. The note had this emotional line: “I can’t imagine a world without you in it, I pray you find peace in the next life.”

Cornell’s death had a huge effect on Bennington. In an interview on radio.com, Mike Shinoda who was Chester’s bandmate said: “When we were doing soundcheck, Chester couldn’t even get through the song. He was getting half way through and getting choked up. Even when we got through the whole song and it was filmed for TV, he kind of just stopped towards the end.

“He missed the last couple of lines and didn’t even finish the song,” he said.

This is referring to Linkin Park performing on the Jimmy Kimmel Live concert series, they were supposed to perform their new song “Heavy” but instead after Chris’s death they decided to perform “One More Light” in his honor.

In a radio interview with Los Angeles Radio KIIS FM, Chester talked about his struggles.

“I know that for me, when I’m inside myself, when I’m in my own head it gets …” he said. “This place right here [points to his head], the skull between my ears, this is a Bad Neighborhood, and I should not be there alone” he said.“I can’t be there by myself. It’s insane! It’s crazy in here. This is a bad place for me to be by myself.

“And so, when I’m in that, my whole life gets thrown off,” he said. “If I’m in there I don’t say nice things to myself.

“There’s another Chester in there that wants to take me down,” Bennington said.

On the morning of July 22nd, 2017, someone went to clean Bennington’s in Palos Verdes Estates in California. When they arrived, they found Chester dead by hanging;  they called 911 and later he was pronounced dead by suicide.

Linkin Park released a statement that said: “You touched so many lives, maybe even more than you realized … In the past few days, we’ve seen an outpouring of love and support, both public and private from around the world. Talinda and the family appreciate it and want the world to know you were the best husband, son and father, the family will never be whole without you.”

Even though Chester is not alive anymore, his legacy will live on forever by his songs and his interviews. The legend that was Chester Charles Bennington will never die.

Linkin Park’s songs have hidden meanings behind their songs that dealt with struggles with depression, suicidal thoughts, abuse and addictions.

For example this lyric from the song “Leave out all the rest”:

“When my time comes forget the wrong that I’ve done, help me leave behind some reasons to be missed.”

That is explaining how Chester is saying that when he dies and leaves this earth, he wants people to have things to remember him by. But not by the bad stuff like the drugs and alcohol problems but like his time with Linkin Park and his family life.

“Battle Symphony, please just don’t give up on me, and my eyes are wide awake.”

Chester explained this saying that he didn’t want to do anything, all he wanted to do was just give up on life.

Chester Bennington was a music icon for the Alternative Rock genre. His voice was unique and he could sing in a pop-like manner but then he could also get very dark and scream in songs where it is not really screaming but it is done artistically. He will be forever missed, and rest assured his legacy will never die.