Woodstock goes all out for Groundhog Day celebrations 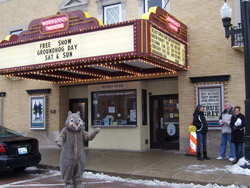 A 1993 classic movie, Groundhog Day, starring Bill Murray, hits pretty close to home for those residing in McHenry County. The movie is set in Punxsutawney, Pennsylvania; however, the real town of Punxsutawney did not have the aesthetic that the movie producers wanted.  Producers looked for a town that had a better small town feel and Woodstock’s downtown square had it.

Twenty-five years since the film came out, the town of Woodstock continues traditions based around it. The town holds several different events and activities nearing Groundhog Day in early February. These events include: bingo, chili cook off, beer tasting, a free showing of the movie, a walking tour of the filming sites throughout Woodstock, a pub crawl to the local bars, and more. Nancy Freeman, a Woodstock resident said:  “It’s great to see so many people around town. I like how Woodstock continues to bring tourists in by using the movie!”

There are several aspects of the movie that have influences on the town, not only on Groundhog Day, but year round. At the time of filming, a private house was used for “Cherry Street Inn” where Bill Murray’s character stayed in the movie.  Now, it is “Cherry Tree Inn Bed & Breakfast” where people can actually stay in Woodstock.

For Woodstock resident Kenzi Evertsen, 21, the best part of the Groundhog Day events is the pub crawl that took place on Saturday, February 3rd. Several local bars, including D.C. Cobb’s, Main Street Pour House, Ortman’s, Corner Pub, and many more, participated in this year’s crawl. “All the places have different specials and deals,” Evertsen said. “It’s a good way to get more people out. It’s fun, and it helps local businesses.”

The pub crawl isn’t for everyone, but the walking tour is definitely family friendly. The tour takes you on a tour of the town, as well as the movie. Some of the stops include: Alpine Theater (Woodstock Theater), the bowling alley (Wayne’s Lanes), the bar scenes (Public House), and several more movie scenes. “You could see so many people walking around with maps,” Freeman said. “Everyone seems to enjoy the tour.”

The downtown square in Woodstock is full of local, family owned businesses. It’s fun year round, and the Groundhog Day events are the perfect excuse to head to Woodstock.

Every year on the actual Groundhog Day, February 2nd, people gather on the square early in the morning, in the often single digit temperatures, to see Woodstock Willie. He is a real groundhog, used to predict the change of the season. This year, Woodstock Willie did see his shadow, predicting six more weeks of winter. This comes with no surprise to McHenry County residents, who are used to long, cold winters. “As a kid, I remember my parents always telling me the morning of Groundhog Day whether or not Willie saw his shadow. It’s a tradition in Woodstock,” Evertsen said.

Overall, the filming of Groundhog Day gives the small town of Woodstock a little more fame. The movie put Woodstock on the map, and has allowed the town to create many traditions that will continue to carry on for years to come. It’s a good excuse to have some fun and get out on the town together.