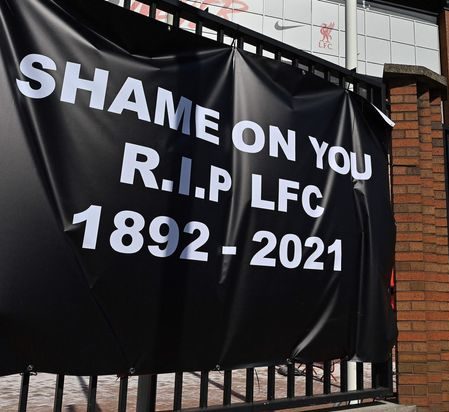 Soccer is for the fans and not about money.

Soccer or football as they call it in England is a sport for the fans not a sport for club owners who only care about money and turn their back on the fans.

Earlier this year, there was a much speculation around the soccer world, but mostly in Europe. Top teams from Spain, Italy, and England were supposedly rebelling from their leagues to make their own tournament, where top teams play each other week in week out.

This Super League idea has been cancelled, but when the process of the creation was happening many rules were enforced toward the players from the clubs participating. Those rules include players participating in the Super League can not participate in the Champions League or World Cup. This made fans very angry, many of them saying football would never be the same again.

The proposed chairman of the Super League and president of Real Madrid, Florentino Perez said in a press conference that his goal was not to kill football, but instead save it, according the Washington Post.

Perez’s evidence for this was that over 75 percent of fans between the ages of 15 and 23 are losing interest in Champions League games. He believes these young fans would rather watch a good game like Barcelona vs. Manchester United instead of Real Madrid vs. Club Brugge.

Fans revolted against their own clubs. In England, fans of the top six teams stood outside stadiums and chanted to let the club owners know how they felt. According to an espn.com these chants included “You greedy bastards, you’re ruining our club,” as well as “It’s not football anymore.”

Gary Neville a former Manchester United player and a commentor for Sky Sports had some harsh words when told to give his opinion on the Super League and the people behind it. “Deduct them all points tomorrow, put them at the bottom of the league and take their money off them. Seriously, you’ve got to stamp on this. It’s criminal. It’s a criminal act against football fans in this country, make no mistake about it. This is the biggest sport in the world, it’s the biggest sport in this country and it’s a criminal act, as simple as that.”

When I heard this, I could hear in his voice cracking as if he wanted to cry. It was as if football was coming to an end and fans could not cope with this change. Neville used his voice to support the fans against the Super League.

The Super League was “stalled for a couple months” after the teams that were supposed to participate in it decided to stay playing in their own leagues as well as in the Champions League. Everything the fans did outside the stadium from chanting slurs, to burning club jerseys, and breaking or damaging things around the stadium must have shaken the owners of the clubs which made them leave it.

Club owners should understand that the Super League is not the way to go as it will kill other competitions including the Champions League, which is the most watched tournament after the World Cup which happens every four years. Soccer should continue as it is today and has been since it first started, for the fans not the money. Now we wait and hope that Florentino Perez does not bring this idea back because who knows what soccer fans are capable of doing.