Disney’s ‘Soul’ is a story for all ages 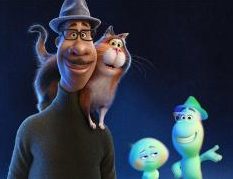 With all that the year 2020 brought, sickness, depression, and inequality, we had a tough time. It is at times like these, that people need relief from the harsh realities of the world, and a little time to sit back, relax, and reflect. When Disney/Pixar studios released their movie “Soul” on Dec. 25 of 2020, directed by Pete Docter, it gained international attention for taking on ideas never before translated into an animated picture.

These studios have never shied away from making their movies for the whole family by taking on adult, rather grown up ideas, while presenting them in fun, light-hearted comedic animation. This movie, however, delves into the very mature topic of death, while delivering a message that has rich application to which almost anyone, adult or child, can relate.

This movie follows main protagonist Joe Gardner (Jamie Foxx), a middle school music teacher in New York City, with dreams of making it to the big stage, as a professional jazz pianist. Just before his big break however, he has a near-death experience, which causes his soul to be sent to the afterlife, where he is separated from his body. While he’s stuck in the afterlife, he is filled with great regret for the life he took for granted, as he thinks it is over. This guilt is the reason he has to fight to find his way back to his old life. Along this journey however, he escapes to a place known as “The great before,” where he finds other souls, but unlike him, these souls are yet to be brought to Earth and put with their bodies. This is where he finds “22” (Tina Fey), a soul in need of a mentor. Joe poses as this mentor and attempts to lead the troubled soul to her spark, or her passion in life. They journey between “the great before” and the real world, with the help of other helpful characters along the way. Throughout the movie, we see Joe putting his own livelihood at risk, in order to help this lost soul find her spark in life.

My favorite part about Pixar films is the way that they disguise harsh reality, into films that anyone can enjoy. For a movie that tackles the theme of death, and the idea of facing a midlife crisis, they portray it in a quite nice, happy, and friendly way. I don’t think most of the kids watching this film would pick up on these things, and fully understand what they say about us and society. Many argue this film isn’t for kids at all, and any adult would be able to relate and enjoy watching this movie. If anything, I see this as a reality check for the viewers, and a chance to reflect on their own life and decisions, which is bold, but nothing particularly new coming from these studios.

Besides the deep themes and countless lessons provided by this movie, it was visually and audibly very pleasant as well. From the nice, light-hearted music and beautiful jazz in the beginning of the movie, to the dramatic, intense music at points later in the film, I give the soundtrack a big win. When I first watched the movie, and saw the amount of jazz influence in it, I was a little surprised, since many people, especially kids, don’t always have the appreciation of jazz. I was glad to see this in the movie, and I think it is good to open people up to all the different kinds of great music. As far as visuals go, the movie was very aesthetically pleasing. I feel as though every time these studios release a new project, the artwork and animation always takes a step up. What stood out to me in this movie, which isn’t altogether that important of a shot, was when Joe is getting his shot to play with Dorothea Williams (Angela Bassett), one of Joe’s jazz idols. When the light hits her saxophone, it looks as if it is real brass, due to the incredible animation. I’ve never been disappointed in the art style and design of these Pixar movies, and this movie is no exception.

Overall, I’d rate this movie an A. It wasn’t the best Disney/Pixar movie I’ve ever seen, but I did enjoy it, as I do most of their movies. I think this movie could be for anyone — adults, kids, the elderly, whoever. I think it has many aspects that can apply to anyone’s life; I think anyone would enjoy this movie. Between the excellent artwork, riveting plot, and fine music choice, an A is a fair and deserving score.