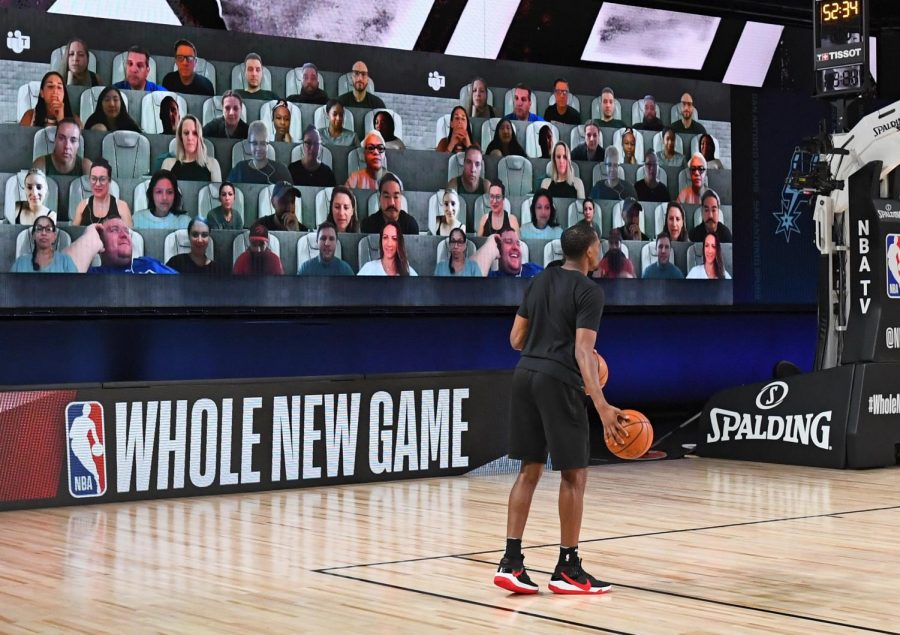 One thing 2020 has taught everyone is not to take anything for granted. The world can stop in a matter of weeks, change can be made in days, and life becomes a new normal. After the outbreak of COVID-19 in the United States, we’ve never witnessed anything like the way sports are today. Stopping seasons, going into a hiatus, and changing the sports calendar. With a new normal being made for the everyday world, we’ll see one in the sports world as well. From empty seats to masks, 2020 has brought the sports world to a new normal.

Sports, as we know it has changed. Today we’re seeing sports leagues across the country implement new changes for the now, and for the later, as COVID-19 is still in our lives. These changes are happening now, and there is no timetable on how sports will be and for how long. We’ve seen the NFL handle its fans in stadiums by teams, as some will have fans at a minimum capacity. In some states like Illinois and California, there are government rules that won’t allow it to happen. Along with the fans coming at less than 30% capacity, masks and social distancing is still in play. Fans at NFL stadiums have temperature checks, masks on, and can only gather with the fans with whom they entered.

However looking at  the NBA, it’s almost the complete opposite. The NBA has been in a “bubble” since mid-July at the Disneyland Resorts in Orlando, Florida. With no access to fans, the resort was taken up by over 22 NBA teams. As the playoffs have continued, players’ families have now been allowed in after COVID-19 protocols. The NBA has seen no COVID-19 cases in over two months, proving that the bubble has worked to continue play. But when this NBA season is over, they will have many questions to answer when it comes to fans, masks, and scheduling the  next season.

As for Major League Baseball, they had an option to make a bubble for their season but choose not to. MLB started a 60-game season that has had no fans at all. According to Sports Illustrated, Major League Baseball Commissioner Rob Manfred is hopeful sports can enter baseball stadiums in 2020. With the postseason starting in October, Manfred said,  “I think it’s important for us to start back down the road. Obviously it’ll be limited numbers, socially distanced, protection provided for the fans in terms of temperature checks and the like. Kind of the pods like you saw in some of the NFL games. We’ll probably use that same theory.”

These are the first steps to getting people in the stands and some normalcy will begin to come back when watching sports. Fans are a natural part of sports and without them we haven’t gotten that full return to normalcy as the pandemic continues. Even at 20 percent or even 30 percent  capacity will make games look more normal both in the stadium and watching at home.

The next step for sports leagues will be getting stadiums and games back to full normal. It won’t happen overnight and will be a continuing process that could take a few years. More of the control isn’t in the hands of league officials but government officials and guidelines as the nation tries to move forward. When it comes to reaching full normalcy, there are a lot of things that need to happen.

According to SB Nation; “The Stillman School of Business at Seton Hall released a poll showing almost three out of four Americans plan to stay home and avoid sporting events until there is a vaccine is developed for COVID-19… 72% said they would not attend a game under any circumstance.”

The control of normalcy won’t be the challenge sports leagues face, it will be  how they react to them and implement strategies for fans to attend. Until COVID-19 can have a vaccine created, tested, and made sure both accurate and universal, there won’t be concerts or let alone 100,000 people in a jam-packed stadium. The barriers faced will have the sports world at a halt, but as the epidemic continues there will always be optimism. Back in May, many people thought the NFL season would be cancelled, let alone with people in the stadiums. Testing has ramped up, masks, social distancing, and other guidelines have made sports a reality after a dark time of doubt. This is what the new sports normal could be for now, as minimum capacity and social distancing fans will be our only option until COVID-19 can be handled. The MLB will have more options for fans next season in 2021, but compared to where the country was 6 months ago, having fans in the stands has shown the strides made from sports leagues.

Many questions still linger around how sports leagues will manage COVID-19 in the years to come. For now, they’ve found ways to manage around it with testing players, coaches, and anyone within each team’s organization. They’ve also made it possible to even have fans in the stands, something that was doubted just a few months ago. Though for now, teams can fill up their stadiums with 20-30 percent  capacity, things going back to the full normal will take longer.

Getting back to full capacity is a long way ahead, as the sports world will have to wait for a vaccine that is both effective and universal. There isn’t an official timetable on that, and sports leagues will have to manage what they can control. Having small capacities, masks, social distancing, and temperature checks will be the new normal until the pandemic can be controlled. There’s a lot of barriers ahead, but there is a slow start to reaching normalcy beginning in the sports world.